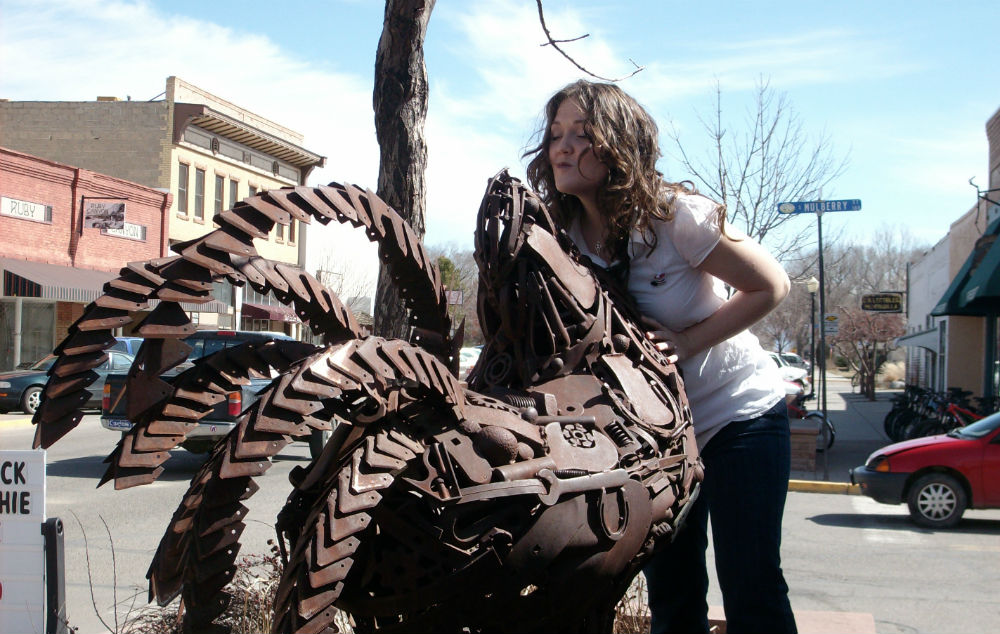 Every year, when St. Patrick’s Day rolls around I think back to the greatest surprise of my life..

Paul and I dated for less than a month when I knew I wanted to marry him. He was like a piece of a puzzle that completed me even though I didn’t realize something was missing.

He knew I had always dreamed of going ring shopping in San Francisco, so he surprised me with a trip to California but first we made a stop in Colorado to meet his family.

We loaded up the car and headed to Denver! Road trips are still my favorite with him. That is true love right there^^^ I love me some white trash pie from the gas station! Why yes, I am kissing a headless chicken in Fruita, CO! If you have no idea what I am talking about read about the famous Mike. Random picture I know, but it is for memory sake 😉 First stop into Denver was seeing Paul’s Aunt Jae. When Paul was a little boy her and her daughter came to live with Paul’s family and she became like a second mom to him. I LOVED THIS DAY!! Sadly, it’s the only picture I have of that day but after meeting AJ we drove to meet the rest of the family. To put it simply, I ADORE Paul’s family. It’s big and loud and I LOVE IT!!

The night before we flew out to San Francisco, Paul’s sister Heather asked, if while I am on the beach if I could search for seashells for her daughter, Allison. She wanted to make a necklace and I agreed to do my best, thinking nothing of it. This boy. AH! I love him. He started acting weird on our way to the airport.. We took selfies before there were selfies! We made it to San Fran!!

Right away, I wanted to ring shop and explore the city, but Paul wanted to go see the beach first. This went on for awhile, and again he was acting so strange. At one point, I even thought to myself, “does he not want to ring shop or get engaged?!” We came upon The Pearl Factory on Pier 39, where you pick an oyster out of a bucket and keep the pearl that is inside. I have always loved pearls, in fact, you can see a pearl ring I was already wearing. I was so excited to open the oyster I picked. Guys, I did good! When the lady opened it up, everyone behind the counter gasped, it was HUGE! I decided right then and there I wanted to make that into my wedding ring. Yet, Paul was so off about it. He kept saying, “no, no, let’s keep shopping” and “I was like, no way” and I picked a ring for it to be mounted on. Sorry, I’m so stubborn, love! Horrible quality but I was so happy with my pearl!

Here, I am in pure heaven and Paul, I’m sure is thinking –dang it!

Now, off to the beach! FINALLY! We had so much fun on the beach! We just walked and talked while searching for seashells for his sister. I actually began to worry because there were NO nice seashells to be found. Always a little boy at heart, I tell you!

I was walking a little bit ahead of Paul, telling him how sad I was that we couldn’t find ANY shells. When he said, “WOW! Look at this one!” I quickly turned around to see him holding a perfectly pink shell and squealed, “WHERE DID YOU FIND THAT?!” and then noticed he was down on one knee!! Then, I squealed even louder! He expressed his love for me and I said YEES! I was SO surprised which was what Paul wanted. It all made sense and to this day I still can’t believe I didn’t put it all together! The woman who took this picture was so darling! She was so excited for us she literally dropped our camera from jumping up and down!

Inside the pink shell (which I still have and my girls LOVE holding and hearing the story over and over) was a princess cut diamond tied up in ribbon. He wanted me to pick the setting, but already knew the diamond I wanted. One of the best days of my life and I love celebrating it every St Patrick’s Day (I tease Paul that we have red heads because we got engaged on the Irish holiday)!

As for the pearl ring, a month later the pearl fell off. When I called the company to see what to do, they told me to mail in the pearl and ring and they would fix it no cost. Once fixed, they would mail it back to me. 8 years later they have yet to mail it back or even refund me! They confirmed they received it but gave me the run around about when they would mail it back to me! I called them countless times (even in tears), emailed and did everything except go to headquarters in Hawaii! Which now that I think about it, I should have when we lived on Oahu!! ANYWAY!! Can you tell I’m still so upset!!!

When we flew back to Denver we had an engagement party and began the wedding planning!! Only video we took.